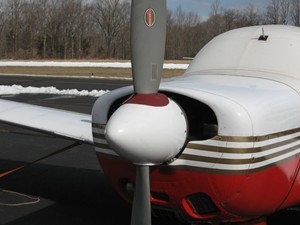 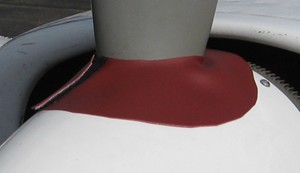 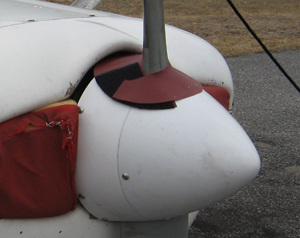 The recommended way to position a propeller when outside in winter is to have a blade opening on the bottom to allow water to drain.

PropPastie works best in winter when the material gets stiff from the cold, and the propeller is in the vertical position.  In the summer when the material is more pliable be sure to have the Propeller either vertical or at most 45 degrees.  Fixed pitch propellers do not narrow at the hub.   PropPastie will not stay in place on a fixed pitch propeller in summer because the material is not stiff as it is in winter.  If the cowling of your aircraft interferes with the  PropPastie,  the PropPastie can be slipped under the lip of the cowling,  bent to behind the spinner or carefully trimmed even with the back of the spinner.   See the photo of the Cessna 150.

In summer the PropPastie can also be used to protect against bird droppings or water on the propeller bearings when the propeller blade is in the near vertical position.

When shipped the PropPastie is folded in the envelope and the crease that results will almost completely disappear in less than an hour at room temperature when flattened under a book.  The function of the PropPastie will not be affected by any creases or distortions as long  the edge of the PropPastie is snug against the propeller blade and installed as previously instructed.